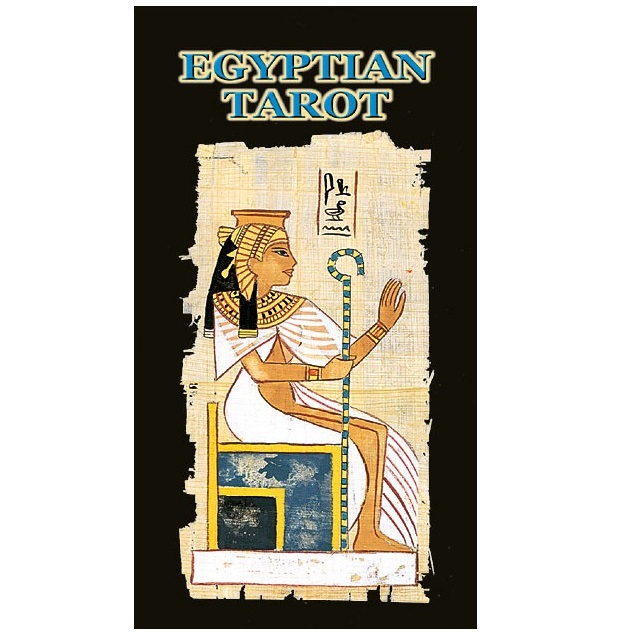 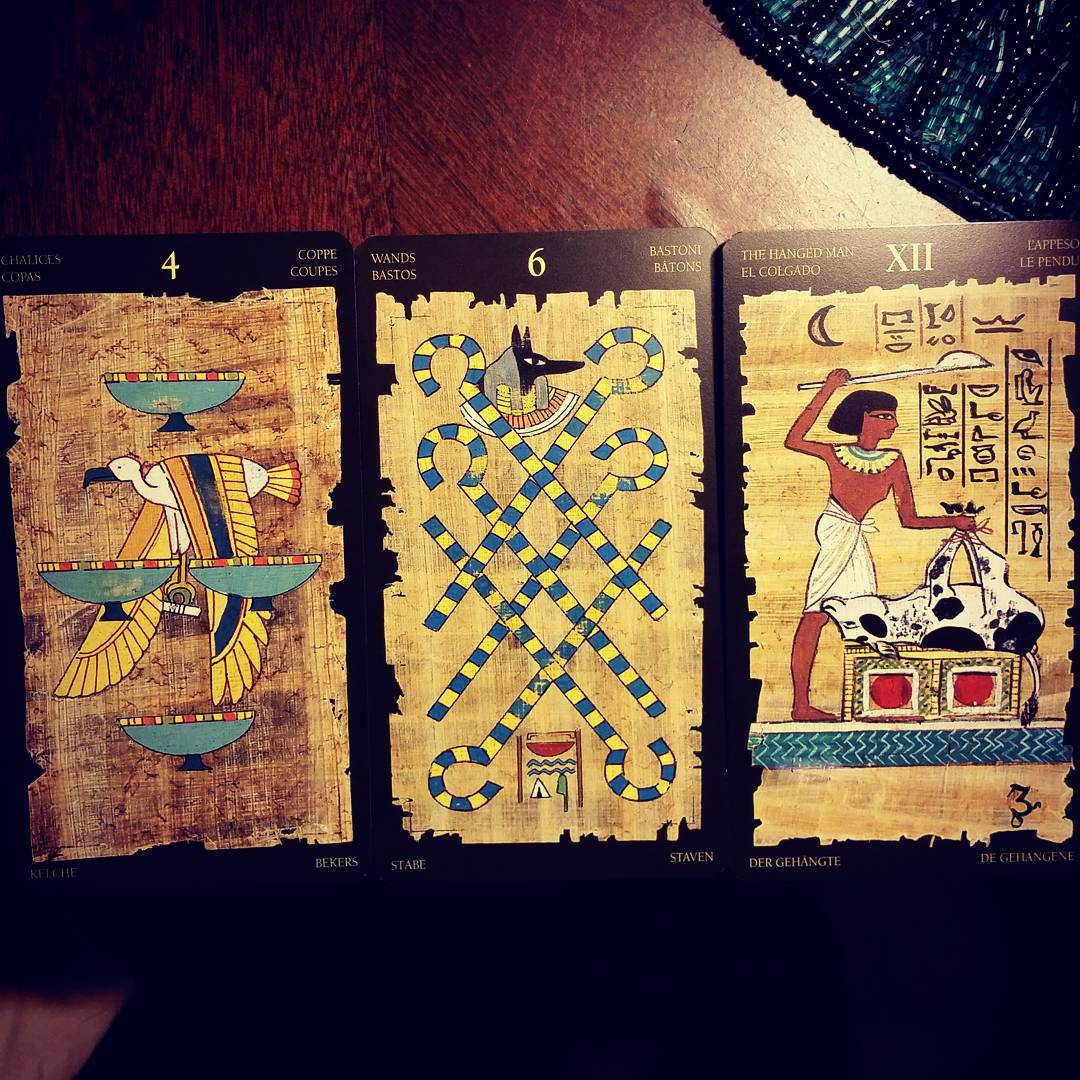 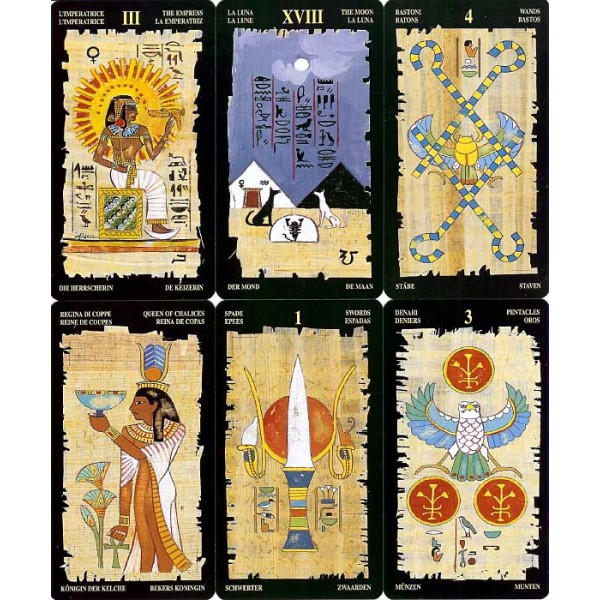 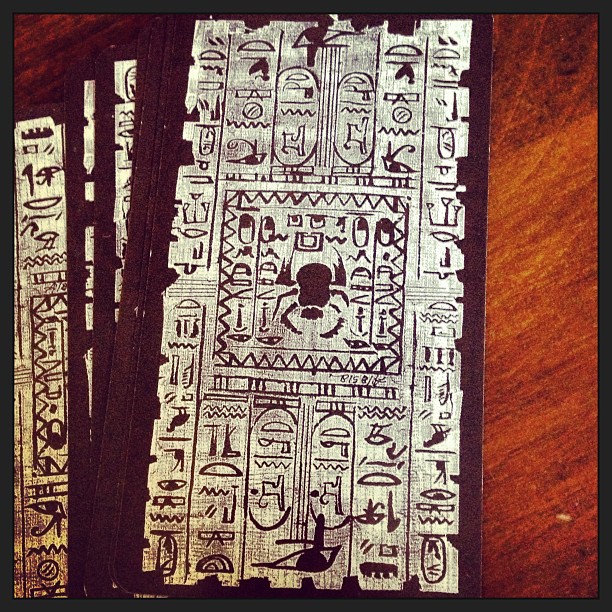 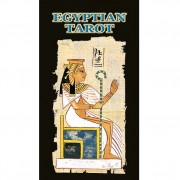 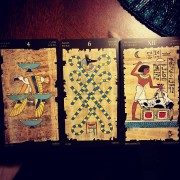 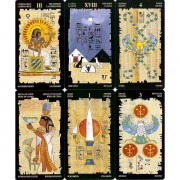 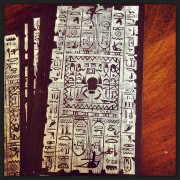 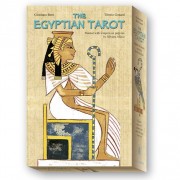 Amazingly detailed and gracefully beautiful, Alasia’s tempera-on-papyrus paintings meld the stunning style of ancient Egyptian art with the mysteries of the Tarot. To shape the interpretations, Alasia relied on the conceptions of Jean-Baptiste Pitois, who linked the Tarot tradition to the legendary Book of Thoth. Replete with ancient and exotic symbols, these cards speak to the soul. Inlcudes booklet.

A book that remains popular is The History and Practice of Magic by Paul Christian. This was the Anglicized name of Jean Baptiste Pitois for a book first published in France in 1870, seven years before his death.

One of the reasons for its continued popularity is due to the dramatic and imaginative writing style, part of which included a fascinating, fantastic, and almost phantasmagorical story of initiation in ancient Egypt that merged with the Tarot. If you made an error in your attempt to achieve initiation the result was imprisonment or death, not a polite refusal. It seemed to be part science fiction, part occult, part fantasy, and part horror, but is presented as if it were a history book. Where is the line between accuracy and imagination drawn?

The modern occult revival developed along with the archeological excavations in Egypt. The incredible pictographic markings and spiritual beliefs of the ancient Egyptians—many of which were poorly translated or untranslated, leading to imagined interpretations—infiltrated occultism, influencing theHermetic Order of the Golden Dawn, Aleister Crowley, and many other occultists. The influence of ancient Egypt on occultism remains to this day. The hold of ancient Egypt on the world also remains, as exemplified by the recent tours of ancient Egyptian artifacts from Tutankhamen’s (King Tut’s) tomb. TheRosicrucians, an organization that sprang up in the early 1600s in Germany, has one group that traces itself back to Akhenaton (died c.1336 b.c.e.) of Egypt.

There have been several Tarot decks that have attempted to capture the flavor of ancient Egypt with greater or lesser success. This deck, however, is the first to capture both the flavor of Egypt with the romanticism of fantasy of Pitois that had triggered the imagination of so many occultists over the ages. The images themselves are well researched and have a degree of reality to them mixed with clever alterations to the Rider-Waite-Smith tradition. The Fool, for example, has a crocodile and not a dog at his feet. The Lovers is closer to the pre-RWS vision showing a golden figure aiming a bow and arrow at one of two women vying for the attention of a man wearing the crown of lower Egypt. Death is illustrated by the weight of the feather of truth (the goddess Ma’at) against the deceased. The Towershows a lightning-struck pyramid, and The Sun shows the famous disk of Aten with its arms reaching out to people below. The Minor Arcana, although filled with two-dimensional images and pictographs, is essentially numerical and not pictorial. This may be a “deal breaker” for those used to the images of the RWS. However, the study to learn the Tarot well-enough so that the images on the Minors are not needed will be rewarded for those wanting to try this deck.

This is a great for doing pathworkings to ancient Egypt. The card images appear to be on papyrus with a black border, the darkness representing night and the feel of the papyrus making pathworkings and past life regressions to that time easier and more effective. If you do any work with Egyptian ideas you’ll want this deck.

For divinations, just let go and the cards may metaphorically explode within you. The meanings become clear and expansive when you let your conscious mind get out of the way and allow the ancient Egyptian symbolism to burst forth.

If you are a Tarot reader, you might decide that the deck alone will fit your needs. However, especially if you’re a Tarot beginner, get the kit. The book in the kit really helps. Berti describes Pitois/Christian’s amazing concepts and how they apply to the deck. Gonard focuses on giving meanings to the Minor Arcana, as well as adding information on Pitois/Christian’s ideas and providing some unique layouts.

This is not a deck for everyone, especially since it doesn’t have the typical RWS images on the Minor Arcana. But if you’re interested in Egypt, the artistic Egyptian Revival, or Egyptian mysticism, this would be a great deck to add to the decks you use.

Deck Attributes
Name of deck: Egyptian Tarot
Publisher: Lo Scarabeo
ISBN: 9780738700106
Artist’s name: Silvana Alasia
Brief biography of artist: Silvana Alasia was born in Turin, Italy on April 20th 1963. She obtained her art school diploma at the Aldo Passoni Art Institute in Torino. She has always been carrying out a long-range artistic career that encouraged her to be constantly creative. She has been an illustrator and author of many books, most of them children’s books, that have been released by popular publishing houses. Besides working as a commercial artist, she has also been a photographer and author of picture books’ projects as well. She started her career as a visual artist and in particular as a graphic designer in 1984 winning prizes and awards. Later on she focused on the figurative painting.
Authors of book: Giordano Berti and Tibero Gonard
Brief biography of authors: Berti is a writer and History of Art teacher. He studied history and philosophy before beginning his career and is known as a Tarot historian.
Available in a boxed kit?: Yes. The kit comes with the book.
Magical Uses: Path working
Reading Uses: General purpose; Past lives
Ethnic Focus: Ancient Egyptian
Artistic Style: Pseudo-Egyptian Pictographs on papyrus
Theme: Paul Christian’s ancient Egypt
Tarot, Divination Deck, Other: Tarot
Does it follow Rider-Waite-Smith Standard?: Yes
Does it have extra cards?: No
Does it have alternate names for Major Arcana cards?: No
Does it have alternate names for Minor Arcana suits?: No
Does it have alternate names for the Court Cards?: No
Why was deck created?: A modern reconstruction of “Paul Christian’s” union of the Book of Thoth and the Tarot.
Book suggestions for Tarot beginners and this deck: Don’t get the deck by itself! Beginners should get the kit with the book.
Book suggestions for experienced Tarot users and this deck: History and Practice of Magic by Paul Christian; The Sacred Tradition in Ancient Egypt and The Sacred Magic of Ancient Egypt by Rosemary Clark. Egyptian Paganism by Jocelyn Almond and Keith Seddon
Alternative decks you might like: Nefetari’s Tarots, Ramses: Tarot of Eternity, Tarot of Cleopatra

Be the first to review “The Egyptian Tarot Deck” Cancel reply