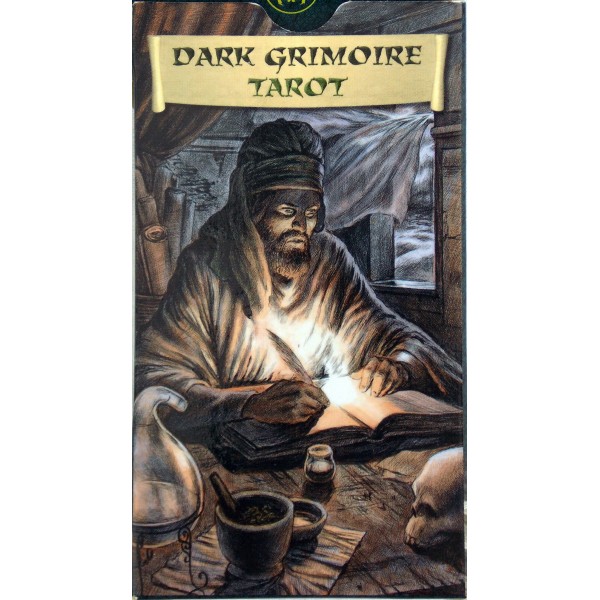 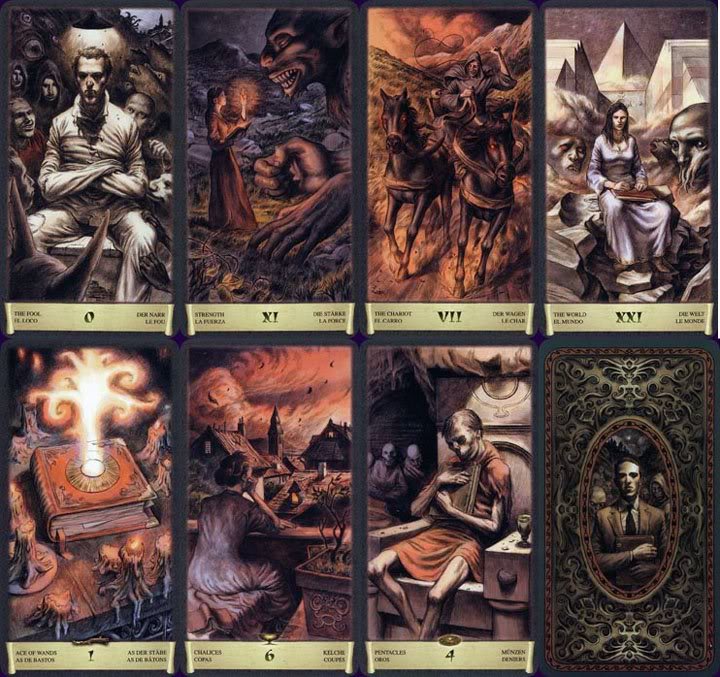 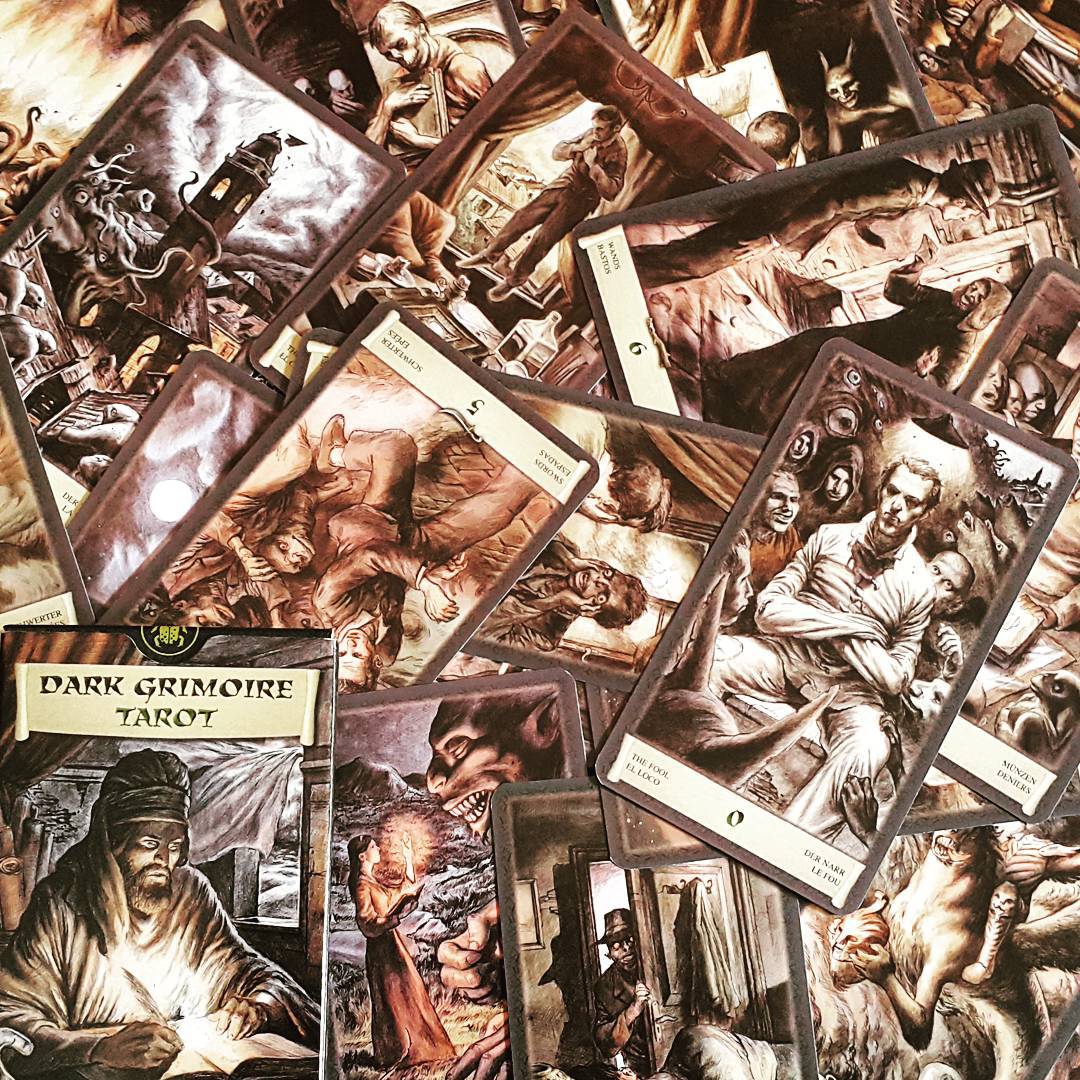 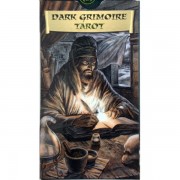 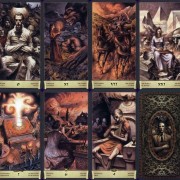 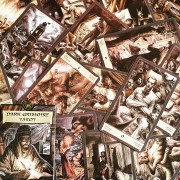 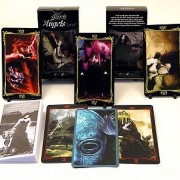 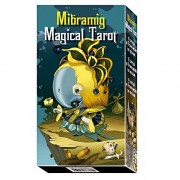 Mibramig Magical Tarot Deck
0 out of 5
( There are no reviews yet. )

Deliciously dark and grimly enchanting, this dread tarot will help you connect with your inner shadow. Strange creatures and powerful sorcerers dwell in savage landscapes—an inspiring realm where magick is reality. This ominous, exquisitely crafted tarot is ideal for magicians, witches, horror fans, and anyone drawn to the dark side.

Flip side of box is in Spanish: Tarot Oscuro de Grimoire

As dark and mysterious as the mythic world created by H. P. Lovecraft, the Dark Grimoire Tarot is strongly recommended for those mature enough and brave enough to examine their darker sides, and by coming to know and control those aspects of their psyches, be able to master themselves. This can lead to true maturity and what Jung called “individuation.” A powerful deck that may be better for personal evolution than for divination.

Howard Phillips Lovecraft (1890–1937) was a mildly successful writer of short stories known as “pulp fiction.” This was a designation based on the inexpensive, pocket-sized magazines where his stories appeared. These small magazines were published on cheap paper known as “pulp.” Today, only a few magazines that were originally “pulps” remain, one of them being FATE magazine. Most of the few that survived are now full-size.

Lovecraft was deeply influenced by earlier and contemporary writers such as Ambrose Bierce and Robert W. Chambers, who not only told a story, but projected a mood. He eventually developed a style that featured a mood of horror lying just beyond what we normally see and hear, horror that is liable to break through into our unknowing world at any moment. He created an entire other world populated by evil powerful beings intent on taking over the Earth. According to the stories, people would try to contact these beings who eventually became part of what was known as the “Cthulhu Mythos.” Lovecraft even invented a mythical book that supposedly revealed the secrets of the beings, giving it the title of a book he had created in his childhood, The Necronomicon.

Lovecraft’s stories are spooky, but on a literary basis he was no Shakespeare. He wasn’t even a Poe. But two things occurred that gave his stories extra life. First, because he wasn’t all that successful, he took many jobs ghostwriting stories for other people (he wrote one for Houdini). He included aspects of the Cthulhu Mythos in those stories. Second, he was part of a group of pulp writers that included Clark Ashton Smith, Robert E. Howard, Frank Belknap Long, Robert Bloch, and others. They would, on occasion, use aspects of the Mythos in their own stories. It became a sort of running gag between them, going to far as even using each other’s names, in disguise, in their stories. If you read many of these stories from different authors, and saw these similar names and characters, might you not assume that there might be something real in all of this? Indeed, for a time, used booksellers were frequently approached with requests for copies of the fictional Necronomicon. And when there is a demand, someone will eventually supply what was demanded.

By the end of the 20th century, several versions of The Necronomicon had appeared. The most popular one blended a bit of Crowley, Sumerian magick, and quotes from Lovecraft into a supposed magickal system that was seemingly usable…or at least it was believed usable by the people who purchased the inexpensive mass market pocket edition that became available.

Meanwhile, there had been during the 1960s-1980s a veritable explosion of interest in the works of Aleister Crowley. Quietly, almost out of nowhere, came a British writer named Kenneth Grant who claimed to have Crowley’s real secrets. Over the years his writings blended some concepts of Crowley with those of Lovecraft. This helped trigger a new interest in Lovecraft not as a fantacist, but as an unconscious revealer of actual occult secrets. The Cthulhu Mythos was alive, and the various versions ofThe Necronomicon were its Bible.

Eventually, Donald Tyson and Anne Stokes did a Tarot deck based on these stories, The Necronomicon Tarot. But just as there are many versions of The Necronomicon, so, too, would there be multiple decks based on that vision. After spending a long time fascinated by the stories, artist and designer Michele Penco created a Tarot along this line, too. In other parts of the world it is known as the “Tarot of the Necronomicon.” In English it is called the Dark Grimoire Tarot.

In actuality, it might be more appropriate to call this deck the “Lovecraft Tarot.” A cameo of his image is on the back of each card. Or perhaps it might be best called the “Cthulhu Mythos Tarot.” The images are taken from many of Lovecraft’s stories that make up the mythos. For example, the Two of Swordsis clearly based on “The Music of Erich Zann,” a violinist who must play to keep horrifying demons at bay. The Three of Pentacles illustrates “Pickman’s Model” and the reason his art was so horrifyingly realistic. The Ten of Swords is obviously from “The Dunwich Horror,” showing a twin that was much more of his terrifying father than it was of his mother.

On the other hand, calling it the Dark Grimoire Tarot is also valid on several accounts. First, the colors—mostly grays and sepia tones with a few very muted tints—are dark. Second, the imagery is also dark. The RWS tradition shows the Hanged Man hanging by his ankle and in a meditative or even ecstatic state. Here, the interpretation is quite literal, showing a man who has been so horrified by what he read in the Necronomicon that he has hanged himself in his dismal garret.

To match the colors, the art itself is very simplistic and muted, no photographic realism as found in some decks today. This is certainly appropriate as it gives the flavor of some of the art found in the old pulp magazines. In my opinion this simplicity is a good thing. With muted, simplistic images you are forced to fill in the concepts with your own ideas. And that marks the true strength of this deck.

According to the psychologist Carl Jung, we each have a positive side and a negative side. He called that dark side “the shadow.” He believed that part of human development is understanding and accepting that we each have a dark side, and then choosing to harness its power while eliminating its negative and antisocial aspects. He called this process “individuation.”

Today, however, most people try to avoid facing their shadow. Everything has to be made 100% safe and “nicey-nicey” or someone is going to sue! Unfortunately, our world is not 100% safe and nicey-nicey. Submerging or ignoring the shadow doesn’t eliminate it. Rather, it allows it to fester and grow in the dark until, in some people, it explodes in acts we term “evil.”

One way to prevent this is to face our shadow and come to terms with it. This deck, with its darkness and incomplete imagery, is absolutely perfect for allowing us to work on this process. This is a deck for the brave and mature. It is haunting and incredibly deep. Ffor personal growth this deck can be an important tool. The Little White Booklet (LWB) adds that this deck is “a key that can open forgotten doors in the darkest corners of the psyche, those doors hidden in the shadows and engulfed in spider webs. Opening those doors can mean gaining knowledge of our own fears and recognizing our own dark side, learning how it can balance our whole being.”

Although the deck follows the basic format of the RWS, the symbolism of the Major Arcana is completely different, at best giving only implications of the RWS. The meanings of the cards may seem unfamiliar to you, as the Cups represent dreams, the Pentacles represent shadows, the Wandsrepresent lights and creativity, and the Swords are demons. Most often they do not show the tool of their suit, although you will find each card labeled. Each suit is a type of separate grimoire. The meanings of these cards are based on the imagery and not necessarily the traditional RWS interpretations.

Therefore, comparing this deck to other Tarot decks is simply impossible. It is its own creature. Perhaps, like Lovecraft’s “Evil Old Ones,” this has just been lurking just outside of our line of sight and is only seen through hints in our peripheral vision during our darkest nightmares, nightmares so real that when we wake we make sure that the windows are closed and the doors are locked.

The Little White Booklet includes a five-card “Magic Pentagram” spread. And since it it modeled after the RWS deck, you can use it for other spreads, too. Don’t be surprised, however, if while giving a reading you slip into self-examination and confrontation with your own shadow.

This deck is strongly recommended for personal meditative and spiritual work. However, as Lovecraft might have advised, don’t try using it when you’re alone—or when you think you’re alone—and in the dark.

Deck Attributes
Name of deck: Dark Grimoire Tarot
Publisher: Llewellyn
ISBN: 9780738713847
Creator’s name: Michele Penco
Brief biography of creators: Penco is an art designer living in Pisa, Italy, who is fascinated by all things Lovecraft.
Name of accompanying book/booklet: Dark Grimoire Tarot
Number of pages of booklet: 64 (14 in English)
Authors of booklet: Giovanni Pelosini
Brief biography of author: Pelosini is a Tarot artist and author.
Available in a boxed kit?: No
Magical Uses: Shadow work meditation, self-analysis, individuation
Artistic Style: Illustration
Original Medium: Pencil or chalk (?)
Theme: H.P. Lovecraft’s Cthluhu Mythos
Tarot, Divination Deck, Other: Tarot
Does it follow Rider-Waite-Smith Standard?: Yes, in name if not in symbolism.
Does it have extra cards?: No
Does it have alternate names for Major Arcana cards?: No
Does it have alternate names for Minor Arcana suits? : No
Does it have alternate names for the Court Cards?: No
Why was deck created?: “This deck of Tarot cards was inspired by the dream worlds of fantasy literature, by grimoires, whether real or imaginary, by the nightmares that they have generated and continue to generate in the depths of the subconscious.
Book suggestions for Tarot beginners and this deck: Any introductory book on the Tarot. Books (collections of short stories) by H.P. Lovecraft.
Book suggestions for experienced Tarot users and this deck: Books by Lovecraft, Kenneth Grant, and critiques of the Lovecraft/Occult linkage.
Alternative decks you might like: Necronomicon Tarot from Donald Tyson and Anne Stokes and The Shadow Tarot by Linda Falorio and Fred Fowler.

Be the first to review “The Dark Grimoire Tarot” Cancel reply