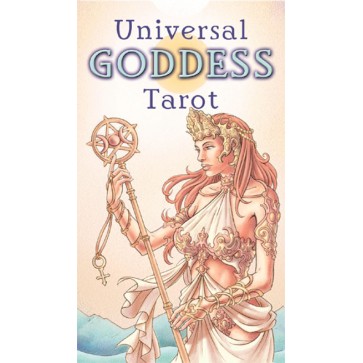 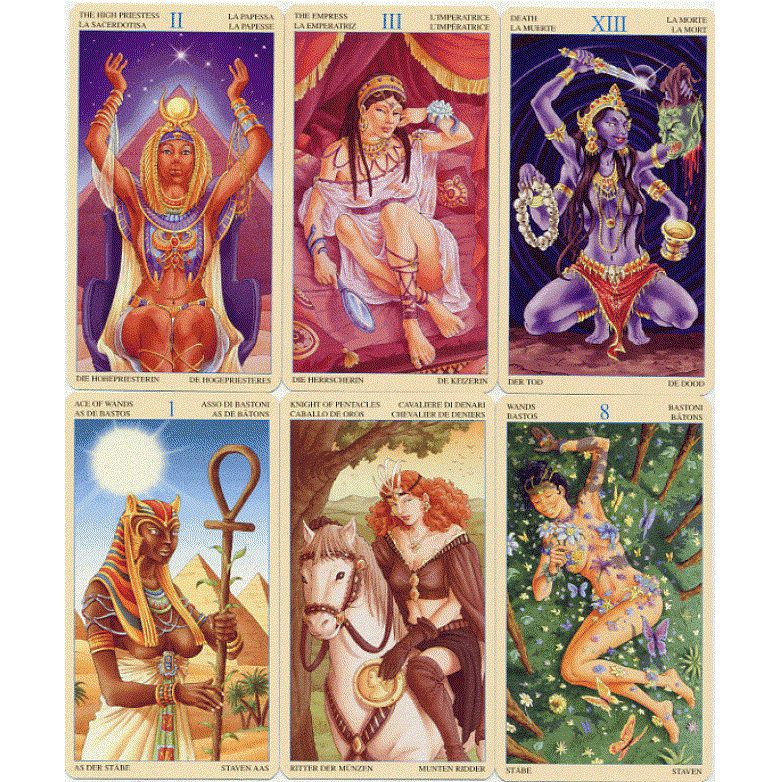 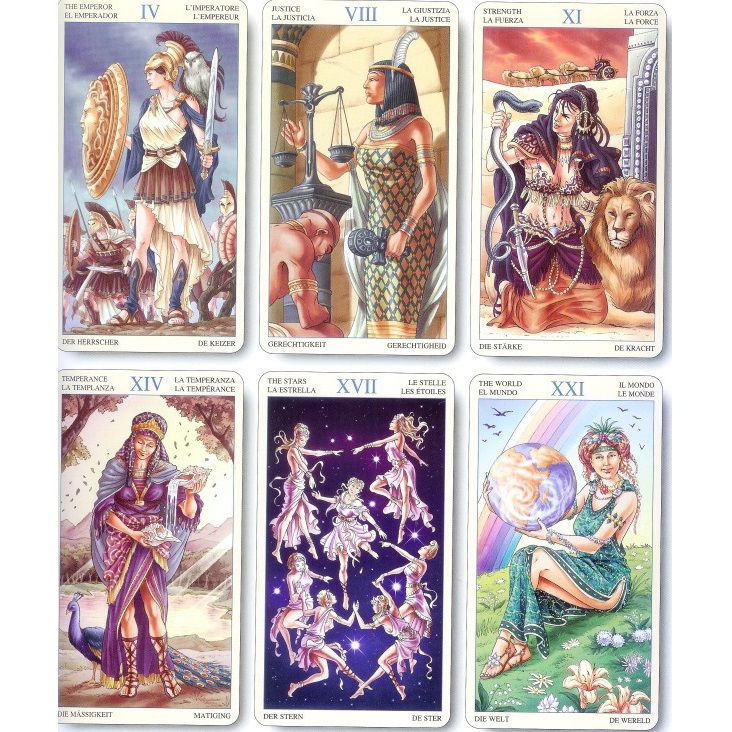 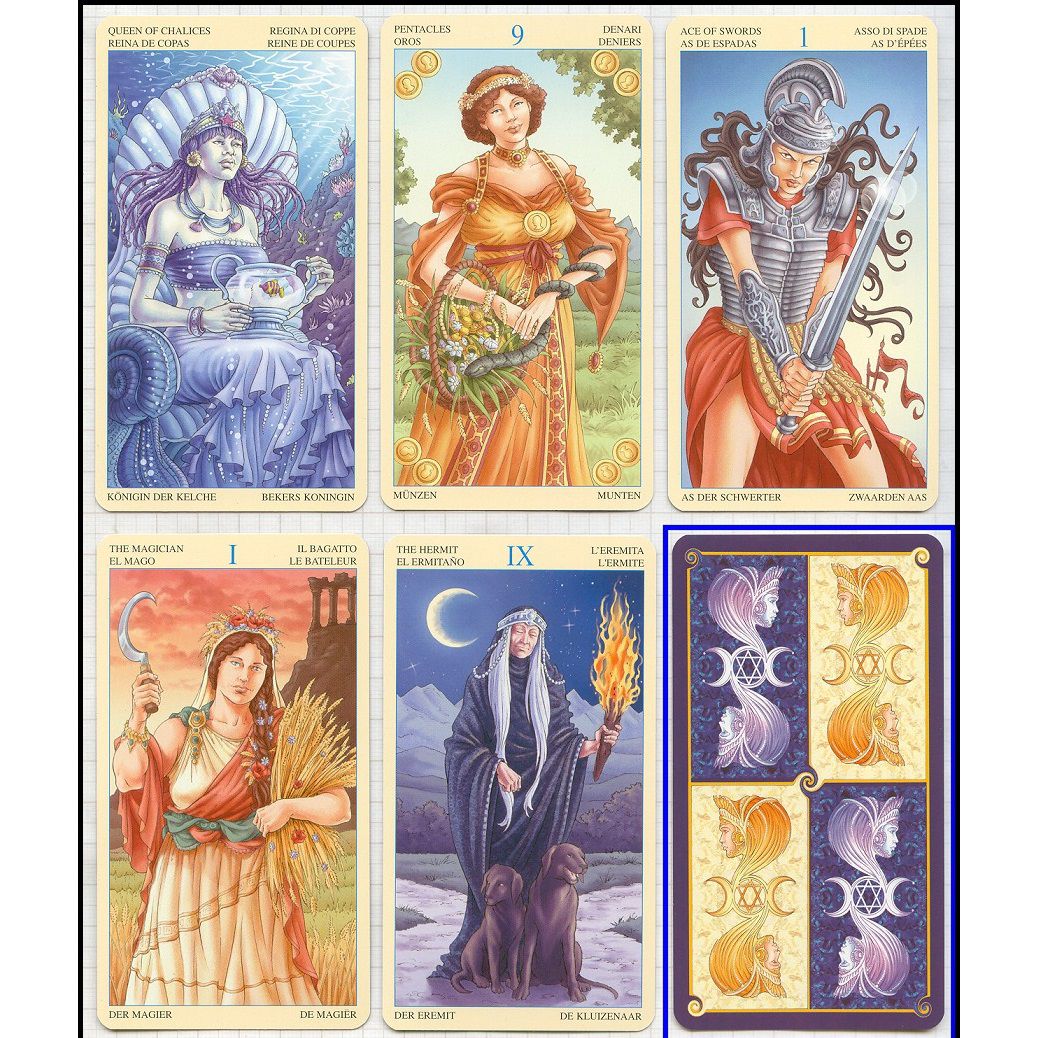 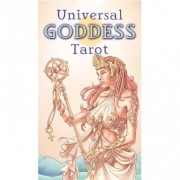 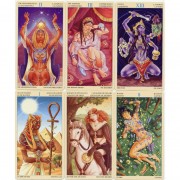 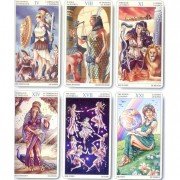 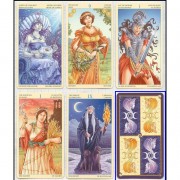 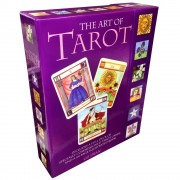 The Art of Tarot

Impressionists Tarot Deck
0 out of 5
( There are no reviews yet. )

Discover your own wisdom and beauty in this intriguing and layered tribute to goddesses from around the world and throughout time. Maria Caratti journeyed through the Tarot and visited with goddesses to create a deck that reveals both with crystal clarity. Each card shows a unique aspect of a goddess that is lush and deep and real. These are goddesses, but they are first and foremost women not one-dimensional super heroines.

The Universal Goddess Tarot manages to succeed, both conceptually and artistically, where other goddess Tarots and oracles fail. First, rather than a random collection of goddesses, it illustrates each arcana with a goddess that expresses the traditional meanings of the cards. Second, it presents the goddesses as complex, real, and, in a way, human. Third, the art manages to express the unique character and culture of each goddess yet the deck as a whole feels unified. Finally, the Little White Booklet captures in very few words the voice of the goddess and the meaning of the card; in addition, it includes a spread that is useful both on a divinatory and spiritual level.

Most people agree that Tarot cards have more than one meaning. And most people familiar with goddesses recognize that they, too, are complex, sometimes with many different stories, myths, and aspects to their lives. Indeed many goddesses wield power over many (and sometimes contradictory) areas of life. And, probably, any goddess aficionados may select different goddesses or different stories to go with each card. It is a tribute to the complexity of Tarot and goddesses that there is no one right way. Nevertheless, Caratti has done an amazing job, particularly with the Minor Arcana, in honing in on a basic meaning for each card and selecting a goddess to speak that meaning. Here are few examples. For the 7 of Pentacles we have a Native American goddess: “I am Estsanatlehi, the Navaho goddess of renewal and evolution. Cast the seeds into the most fertile soil and wait. The miracle of nature repeats every time for those who are patient, faithful, and loving.” For the 4 of Swords, we meet a goddess from the East: “Solitude is sweet only when it is not accompanied by remorse, regrets, and sacrifices. Mine is a bitter solitude. My name is Chang-O and I am a Chinese goddess.” The Queen of Cups is particularly mesmerizing: “I am Yemaya, Yoruban ruler of the depths of the sea. I am the goddess of generosity, good feelings, love, tolerance, and fidelity.”

Sometimes we forget to recognize the faults and struggles of goddesses. It is easy to over-simplify and think of them as perfectly good, wise, and powerful. Caratti and Platano (the artist) were careful to avoid that. In an interview, Caratti said:

“As I gradually proceeded with the research, I realized that the life of each Goddess, the character, personality, strengths and weaknesses of each one, narrated, through the centuries and continents, the history of the feminine character and life in general. Goddesses, yes — but most of all, women. Women who were newborns and then became playful and carefree children, who grew into young girls and fell in love, then became thoughtful and loving mothers, finally filling the role of wise and discerning old women.
“We [Caratti and Platano] decided, right from the start, that the Goddesses would have a ‘real and earthly’ appearance, far from the evanescent and ethereal images with which they are often depicted. The Goddesses needed to relate the life of our dimension, material and tangible, so that every woman could identify with each of them.”

And as we journey through this deck, meeting a shamed and betrayed Sif, the colorful and energetic Oya, Hel in her cold, dark kingdom, the defensive and aggressive Akycha, and courageous warrior Bellona, it would seem that Carattie and Platano achieved their goals.

Sometimes decks that seek to include images from different cultures can feel disjointed. Readings with such decks can be jarring, the shift from style interrupting the flow of the interpretation. Platano has created cards that are easily recognizable as Egyptian, Native American, Chinese, Japanese, African, Celtic, Scandinavian, Greek, and more and yet maintain a cohesive feel to the deck. Part of this can be attributed to her color palette. She certainly didn’t use the same colors for each card, but she kept all the colors used within a certain tonal range. It is an interesting technique and works well without sacrificing the authentic feel of each individual card.

We’ve already looked at a few examples of the Little White Booklet text. By letting each goddess speak, introducing herself and giving her personal message about the card, Caratti is able to communicate quite a bit of information in a very short space. These messages may require the reader to think for a moment (not a bad thing, surely!), but provides a more coherent message than, for example, a list of keywords. The six-card spread included is called “The Temple” and has positions that divine the situation being asked about, positions that give advice, and a position for a special message from a goddess. It really is a well-rounded spread that would be appropriate for many types of questions.

In addition to divination, this deck is also useful is meditation. A simple technique is, just before entering the meditative state, gaze on the card, memorizing it. Then close your eyes and imagine yourself entering the picture and interacting with the goddess. Also, this deck can come in handy for magical work. If you are casting a circle and want to represent or invite a certain goddess but don’t have a statue or other item to symbolize her, using her card from this deck will work in a pinch.

Deck Attributes
Name of deck: Universal Goddess Tarot
Publisher: Lo Scarabeo, distributed by Llewellyn
ISBN: 9780738710068
Artist’s name: Antonella Platano
Brief biography of artist: Comic artist and illustrator of The Gay Tarot, The Witchy Tarot, and theTarot of 78 Doors.
Name of accompanying book/booklet: Universal Goddess Tarot
Number of pages of book/booklet: 63 (14 in English)
Author of booklet: Maria Caratti
Brief biography of author: The designer of The Secret Forest Tarot and The Harmonious Tarot.
Available in a boxed kit?: Yes. The deluxe kit includes an embroidered velvet bag.
Magical Uses: Rituals, path working, and general magic.
Reading Uses: This deck will work well for any reading.
Ethnic Focus: International (goddesses from all over the world and throughout time).
Theme: Goddesses
Tarot, Divination Deck, Other: Tarot
Does it follow Rider-Waite-Smith Standard?: Yes
Does it have extra cards?: No
Does it have alternate names for Major Arcana cards?: No
Does it have alternate names for Minor Arcana suits?: No
Does it have alternate names for the Court Cards?: No
Why was deck created?: To explore the archetypes of Tarot through the lens of goddesses.
Book suggestions for Tarot beginners and this deck: A beginner’s book that does not focus on Rider-Waite-Smith symbolism, such as Mary K. Greer’s 21 Ways to Read a Tarot Card or The Complete Tarot Reader and a book on goddesses such as The Goddess Pages or The Goddess Guide.
Book suggestions for experienced Tarot users and this deck: In depth reference works about goddesses or collections of mythologies.
Alternative decks you might like: If you like this art and would like a light-hearted, fun, and clever deck: The Witchy Tarot (also sold as a kit under the title The Hip Witch Tarot). If you like powerful female figures: The Enchanted Oracle.

Be the first to review “Universal Goddess Tarot” Cancel reply