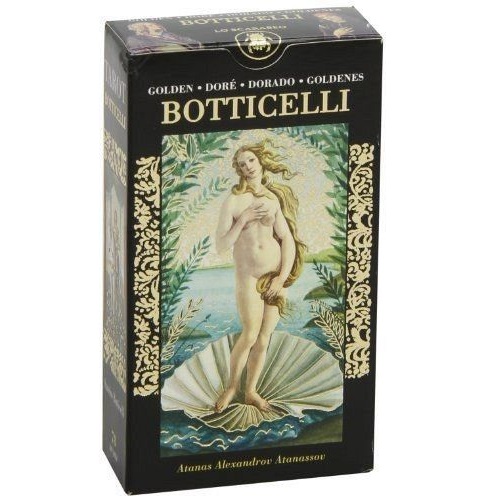 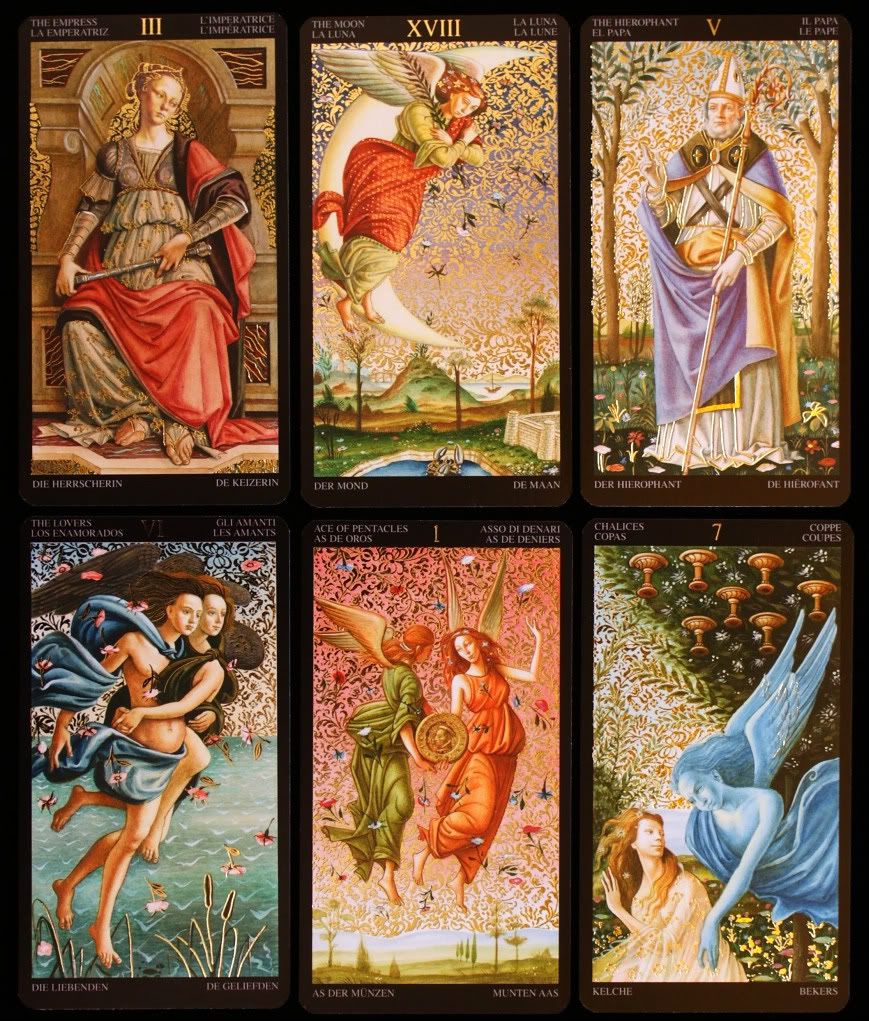 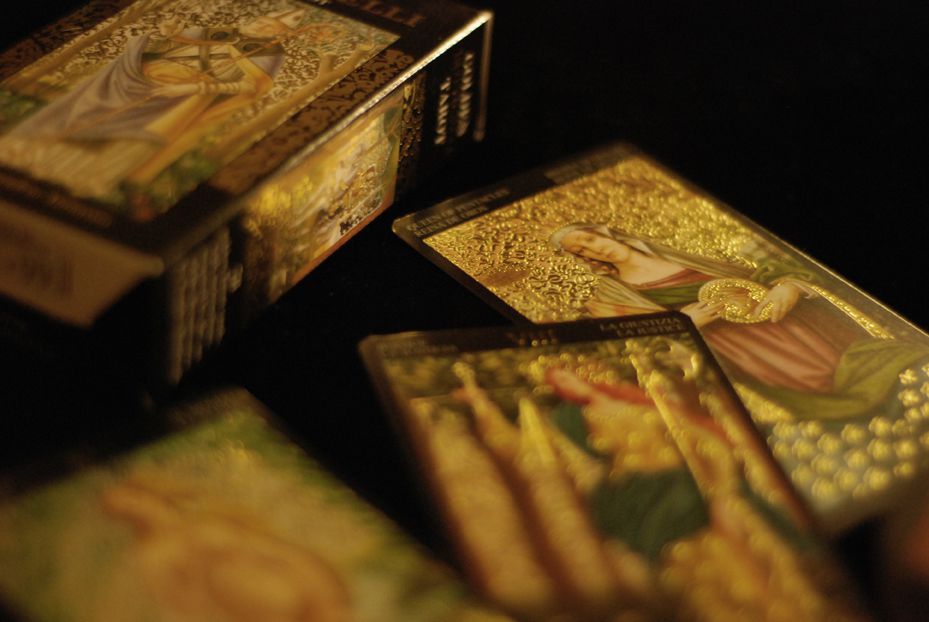 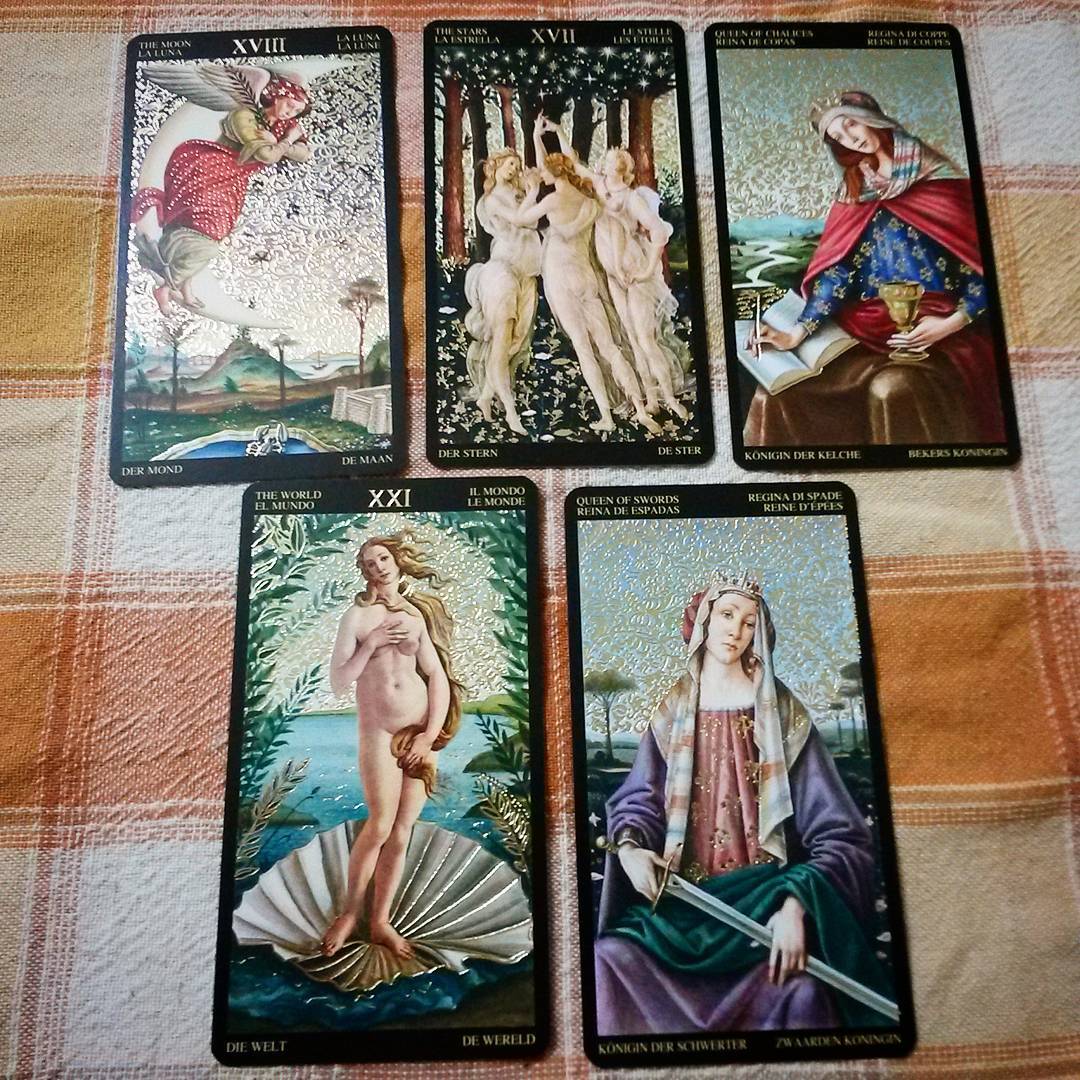 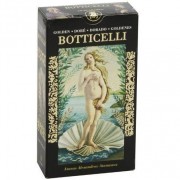 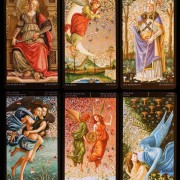 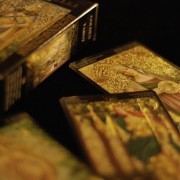 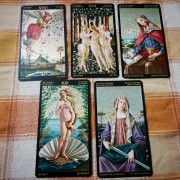 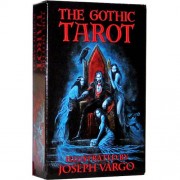 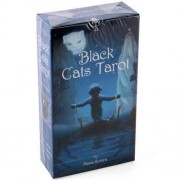 The great work of this Florentine master enlivens this deck with Renaissance flair and grace. Let Botticelli’s timeless art-reproduced here with gold highlights-take you to new dimensions of nature, beauty, and spirituality. A spectacular deck combining the archetypal Renaissance art of Botticelli with magnificent, metallic-gold filigree. Will be used often by intermediate and advanced Tarot readers. One of the few art decks that transcends the category to be useful as a reading deck, too.

One of Aeclectic Tarot’s Top Ten Decks for 2007!

Sandro Botticelli (born Alessandro di Mariano di Vanni Filipepi in 1445 and died in 1510) had the patronage of the (in)famous Lorenzo de’ Medici, and the two works considered his masterpieces, “The Birth of Venus” and “Primavera” have become so popular that they have achieved cliché status when trying to represent Renaissance art in Florence, Italy.

Botticelli created numerous artworks, and in this deck, artist Atanassov has cleverly cut and pasted sections Botticelli’s works—sometimes duplicating images in the background (such as repeating the image of a sword to give the appropriate number of swords in a card) and sometimes changing the size (such as making the coins bigger to draw more attention to them)—and massaging them in a surprisingly effective way to produce a deck that is mostly similar in imagery to the Rider-Waite-Smith version.

Botticelli’s art is so archetypal of the era, that doing the work of creating a deck from his work would alone make this a worthwhile deck. But Atanassov and Lo Scarabeo did more. In background areas, instead of washes of color, they filled the space with delicate golden filigree—the ink is metallic gold, giving the impression that someone went back over your deck hand painting complex patterns using molten gold with an ultra-fine brush.

The bright, metallic gold ornamentation, combined with Botticelli’s art, has resulted in lots of reviews consisting of a single word such as “breathtaking,” “spectacular,” and “awesome.” Images of the cards found online do not came close to the magnificent use of metallic gold on these cards. Simply put, this is a deck you have to see.

Often, when a review focuses on the way a deck looks, it gets classified as an “art deck” and worthy of collection, but not necessarily for use as a divinatory or magickal tool. The Golden Botticelli Tarot easily transcends such limitations, making this one of the few decks that qualifies as both an art deck for collectors and a reading deck for Tarot practitioners.

The LWB that comes with this book is better than most. The author describes the interrelationships ofgroups of cards within the deck (Major Arcana, Aces, Court Cards, etc.) which is not often described in Tarot books, let alone LWBs for any deck. Also described is an original seven-card spread, the Star of Solomon layout. This is followed by an example reading, something which should be included in far more LWBs.

After you get past the shock of the beauty of this deck, you’ll be amazed and totally intrigued, wondering where Atanassov found images within Botticelli’s corpus that so uncannily match the RWS model.

The Fool shows a man about to fall with a dog nipping at his feet. The magician show a man at a table (an ersatz altar). In the background are magickal books. If you are familiar with the RWS, the meanings of these cards are clear. By the way, all of the cards have a glossy black border that draws attention to the image.

The Empress shows a woman holding a wand and sitting on a type of throne. She might be pregnant. The Emperor sits on a similar throne, wearing a crown and holding a sword in one hand and a sphere of authority in the other. The Chariot shows a warrior standing on a heavy, two-wheeled chariot being drawn by two white horses. Justice has a woman holding the scales. Strength shows a woman with her hand in the mouth of a lion.

Death departs from the usual RWS image, instead showing a woman sitting and holding the body of a young man, giving the impression of the popular Pietà motif. The Devil shows a young and innocent-looking Pan figure, his lower half being a goat and his upper half being a young boy with the exception of goat-like ears. His right hand is in a posture commonly used to show the figure blessing someone.

The Star, which, as in this case, Lo Scarabeo usually calls “The Stars,” uses a close up of the famous three dancing women from Botticelli’s Primavera. This is a major departure from the RWS tradition, and the white and twinkling gold drawings of stars in the background trees don’t really make up for it. Still, with the name of the card given, a person with a little experience will know what this means and can use it. The World shows the famous image of Venus rising from the ocean, standing on a shell.

All through this deck you will find cards that either match Botticelli’s art with the RWS image (Did Botticelli really paint people rising from tombs as shown in the Judgement card? Amazing!), are very close, or add an interesting fillip and new context to the name and traditional meaning of a card.

You’re going to find this deck a delight to use for virtually any sort of Tarot reading. For anyone who has studied even a tiny bit of Renaissance art, these images open new understandings of each card, understandings that aren’t foreign to the RWS tradition, but add and modify that tradition in unique ways. Good for any general reading and especially for relationship readings.

Once you start working with this deck, even if you try to put it aside to work with another deck, you’ll keep getting drawn back to it. The Golden Botticelli Tarot is just too magnificent and archetypal to ignore and too beautiful to pass up. Definitely a keeper and a deck to use.

Be the first to review “Golden Botticelli Tarot” Cancel reply