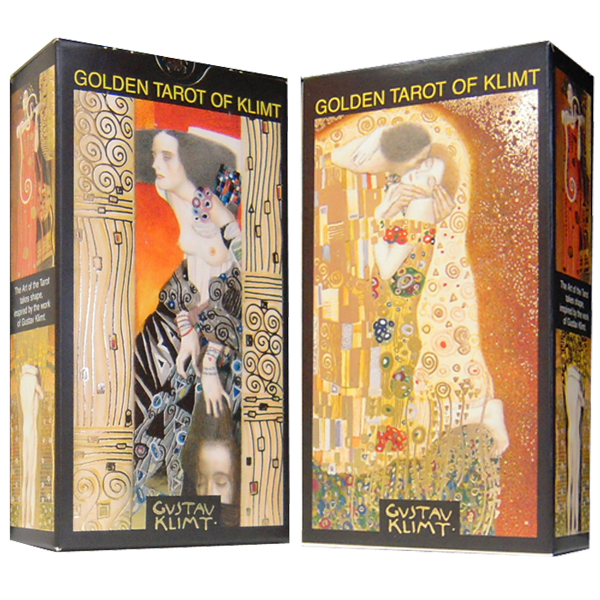 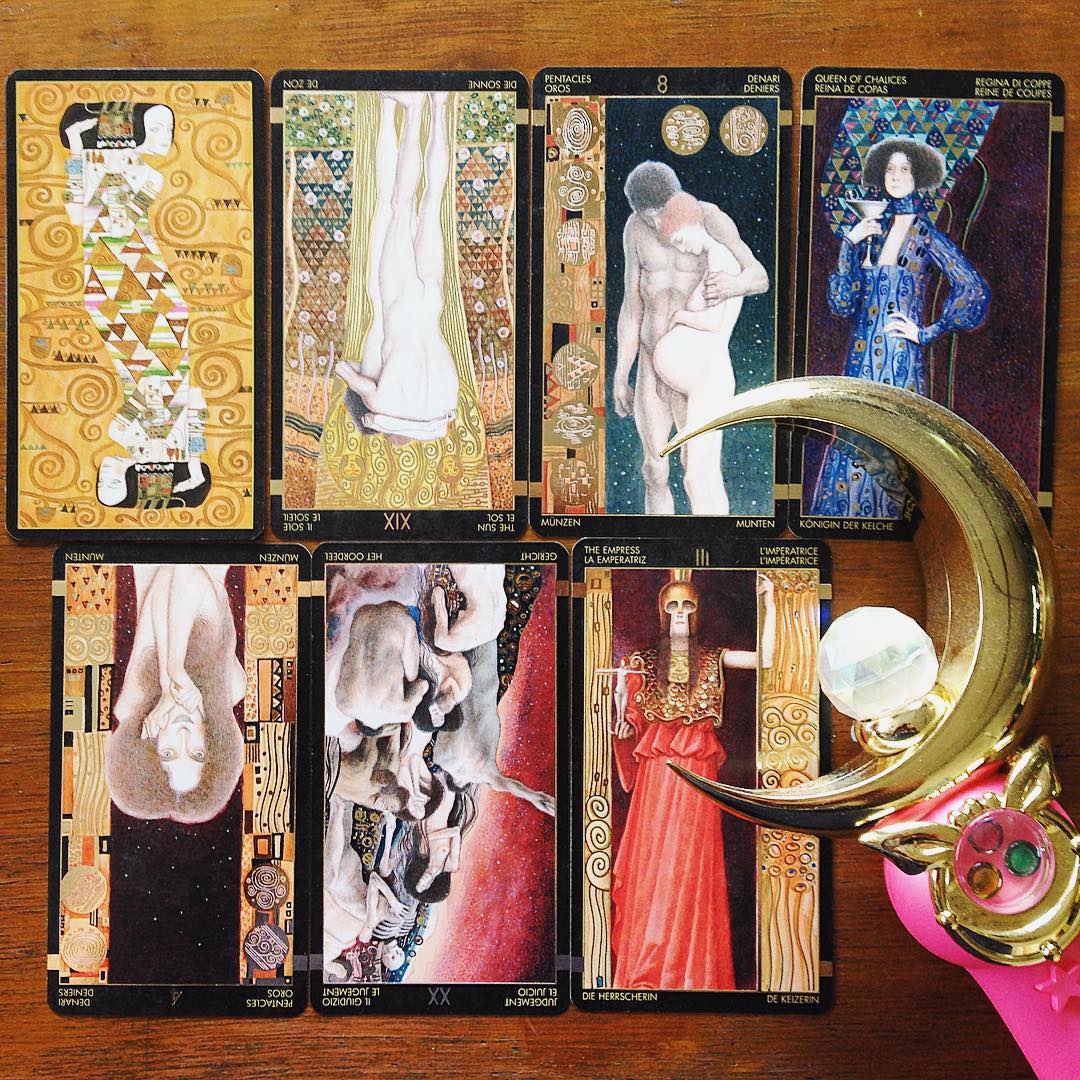 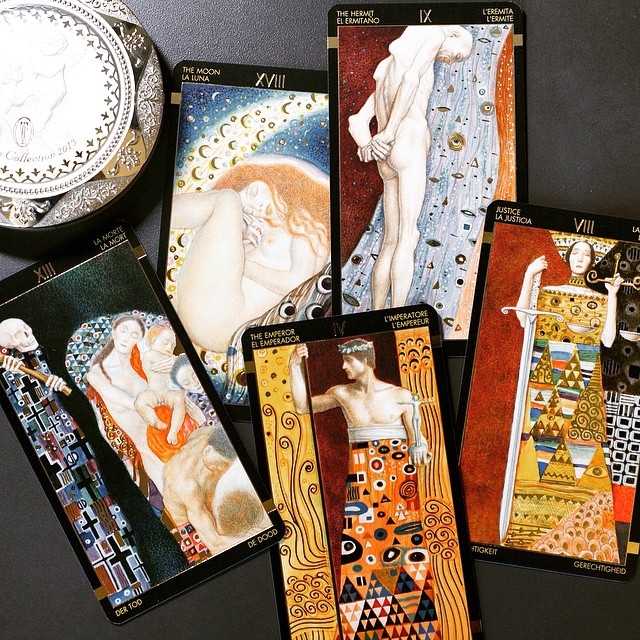 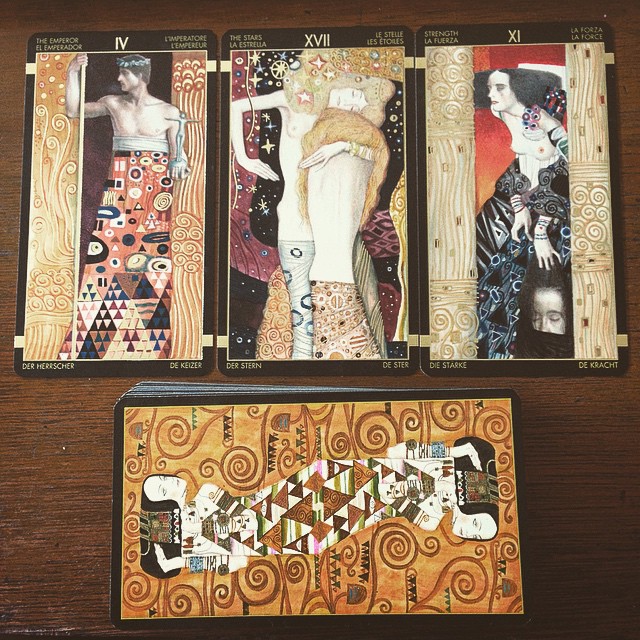 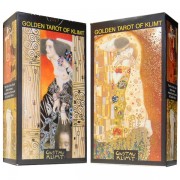 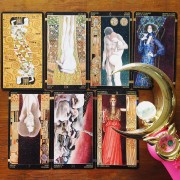 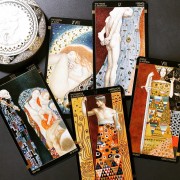 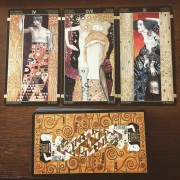 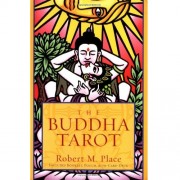 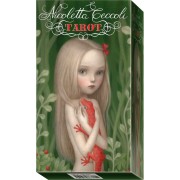 The art of Gustav Klimt (1862–1918), filled with symbolism, passion and eroticism, have become so popular that they appear everywhere, from posters on college student’s walls to coffee mugs, from stained glass imitations to ceramic tile. His piece, “The Kiss,” is virtually iconic and his painting of Adele Bloch-Bauer sold for $135 million in 2006, the highest price ever for a painting.

Klimt combined graphic techniques with pictorial ones, flaunting conventions of the time, perhaps in anticipation of Weimar Germany that began a year after his death. Besides his mastery of inventive art and design, many of his works included mystical symbolism and allegory. It was this that inspired the creation of the Golden Tarot of Klimt.

There are two things you will notice immediately when you look at this deck. First, the black borders of the cards make the muted color palate of Atanassov’s version of Klimt’s work really stand out and jump at you. In graphics terms, the images “pop.” The result even gives a semi-3D quality to some of the cards that is striking.

The second thing you will notice is the dramatic yet judicious use of gold stamping to various lines and sections, giving the cards an amazing richness that goes beyond standard reproductions of Klimt’s work. The gold stamping is used judiciously, accenting the colors and symbols of the images. The gold is exciting addition rather than a focus. And considering the brilliant reproductions, Atanassov should be complimented on the decision to use metallic gold with restraint.

Some of the cards are very close to Klimt’s originals, while others are simply based on Klimt’s style, itself heavily influenced by everything from classical Greek and Minoan art to the Japanese Ukiyo-e style. Many of the images use the famous textile-like backgrounds Klimt often used. For example, the Fool uses such a background in front of which is an elderly nude male, standing with his head in his hands. The LWB describes this as “Lack of points of reference, loss of identity, confusion” and gives “Rebirth, stripping oneself completely, letting go of excess” as divinatory meanings. So the image is different from the RWS, and the meanings, while similar, have slightly different flavors—appropriate for a rebel of Klimt’s style.

The art in this deck covers the styles of Klimt throughout his lifetime. Thus, you’ll find scenes as familiar as the aforementioned iconic “The Kiss” (as the Lovers), but also a more Beardslyesque Strength card. Death looks like a medieval painting of a religious icon while the Devil appears to be a precursor to post-war surrealism and Jungian dreamwork. The seven of Chalices is a surprising blend of Egyptian and Japanese styles that works wonderfully. The Minor Arcana is closer to the RWS.

Many of the cards are eerily evocative of other realms and dimensions, making this deck ideal to work with for astral projection and even for meditation. Focusing on the images can help you literally get out of your head.

This is a well-designed deck that can be used for divination, meditation, and astral travel. The LWB includes a wonderfully complex 16-card spread called “The Circle of Faults and Virtues” which people should work with just to show there are more possibilities with the Tarot than simply mix the cards all together and lay them out. Highly recommended.

Be the first to review “Golden Tarot of Klimt” Cancel reply